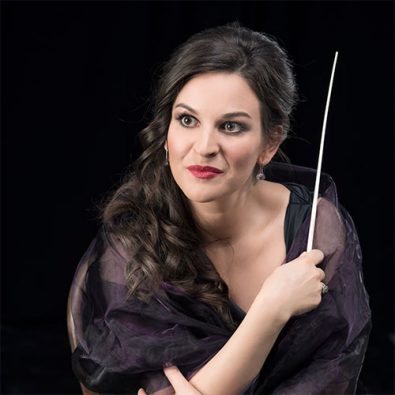 She is the founder, first conductor and producer of the Ventoscala Symphony Orchestra since its foundation in 2003. Since 2001 she has been working at the Weiner Leó Secondary School for Music, first as a piano accompanist (2001-2009), then teaching composition as main subject (2006-2014). Since 2013 she also teaches composition as main subject at the Béla Bartók Secondary School for Music, and from 2016 on she works as a mentor in teacher training.

As a piano accompanist she cooperated with the Institute of Theatre Arts of the University of Theater and Film Arts Budapest, the Opera Studio of the Liszt Ferenc Academy of Music and with worldwide renowned artists at the Radio France Festival in Montpellier.

In 2002 she won first prize at the Vántus István Music Composing Competition for young Hungarian composers. In 2003 she won first prize at the Kincses Composing Competition organised by the Liszt Ferenc Academy of Music, while in 2001 she gained the prize of the best performer at the same competiton. With a scholarship she took part at the master courses for music composition of József Sári in Austria as well as of Betsy Jolas in France.  In 2004 she gained the opportunity from the Liszt Ferenc Academy of Music to travel to New York to perform her piece Ashed Lovers at the Juillard School. She obtained the Kodály Zoltán Scholarship for young composers in 2006, 2009 and 2010. In 2017 she represented Hungary at the ISCM World New Music Days in Vancouver with her composition for mixed choir Choral.

Her pieces are to be heard at several contemporary music series, e.g. at the MR3 Bartók channel in the series Music of Our Age, at the Fészek Artists’ Club in the series Youth Contemporary Music Evenings, at the Café Budapest Contemporary Arts Festival, the Budapest Spring Festival as well as the Mini Festival. In 2004 she was commissioned by the Hungarian Academy in Rome  and in 2007 by the Liszt Academy to write a piece for the Trombone Contest where she was invited as a jury member, too.  Her composition for children’s choir has been the compulsory work in the final round of the Béla Bartók International Choir Competition in Debrecen. She was commissioned to write a choral piece for the 50th anniversary of the same competition and the 750th of the city: her work Vivat, crescat, floreat was performed by the Kodály Choir at the gala concert. In 2014 she was commissioned by the Liszt Academy to write the compulsory piece for the National Clarinet Contest and she was invited to be a jury member, too. Her piece for the fairy tale Hansel and Gretel is often performed in all Hungary; with over 50 performances she has recently written a symphonic version of it.

She was the only Hungarian candidate among the 20 finalists of the 51st International Besançon Competition for Young Conductors in 2009, selected from hundreds of applicants.

Her conducting masterclasses held with the collaboration of the MAV Symphony Orchestra in 2011, 2012, 2013 and 2014 have been visited by young conductors of 15 countries.